That Ladies and Gentlemen was what greeted Wild Bikes members Mike H and Nige W on the start line of the Mawr route at this years Tour de Mon.

Ahead lay 6,000ft of ascent and 107 miles of riding around Anglesey taking in Trearddur Bay (twice), Mona Airfield for the Flying Mile, Niwbwrch (Newborough), Llanfair PG, a quick visit to the mainland via the original Menai Bridge, Beaumaris, Llandonna, Moelfre, Parys (or Copper) Mountain, Amlwch, Bull Bay and Cemeas before heading inland to Llanddeusant and the final feed station at Melin Llynnon from where it is 17miles to home via Valley Crossroads, Trearddur and the coast road to Holyhead.

A few miles out from Mona, Mike picked up a thorn branch in his front tyre. This proved to be a remarkably airtight seal and we reached Mona and completed the Flying Mile (more in a moment) without incident. A closer inspection of the tyre at the Mona feed station led to debate as to whether the thorn could be left in place…… the sage nod from the gentleman with all the “scrambled egg” on his shoulders when it was decided to replace the tube showed this was the right decision. Fighter jet or Surly bike, no equipment was going to leave his base if not road (or air) worthy.

The organiser’s had taken pity on the riders and rejigged the Flying Mile so the timed run was with the wind on our backs. Hands on the tops, just chatting  (no point in killing yourself with 80 odd miles still to go!) and with Garmins showing 25mph+ Mike and I were timed at 2min56sec and 2min57 sec respectively. It was a rude shock to turn back into the wind and almost come to a dead stop……..

On departing Mona it was next stop Beaumaris. Crossing the Menai Bridge another Wild Bikes shirt was spotted. And at the Bulkeley Hotel (a posh feed station this one) Ashtin appeared. He also seemed to be bringing better weather with him as the wind gradually reduced throughout the rest of the day and the sun made the odd appearance.

Rain capes and leg/knee warmers removed, it was three Wild Bikers that left Beaumaris to tackle the second half of the route. This very rapidly became two as Ashtin disappeared into the distance with consummate ease when we hit the first incline. Club riders hey…….

Having got over the steep gradients around Llandonna and enjoyed some of the descents towards Moelfre it was time to top up the bottles and take on more Barra Brith at Moelfre Library before heading out for probably the most difficult section of the ride, from Moelfre to Llanddeusant. I am not convinced there is a piece of flat road in Anglesey; if the rolling nature thus far could be classed as “U” or “PG” in places it was now full on “R18”. It’s not the two “draggy” climbs of City Dulas or Parys Mountain but the country lanes. They are unrelenting in their “ups and downs”. Being a big chap, speed is my friend in this terrain and Mike who is quite happy to climb anything must have been fed up to hear my shouts from behind at the top of each rise, “use the speed” – once in front I was able to use the free speed on many of the descents to crest or nearly crest the following rise……..a lot easier on the legs!! 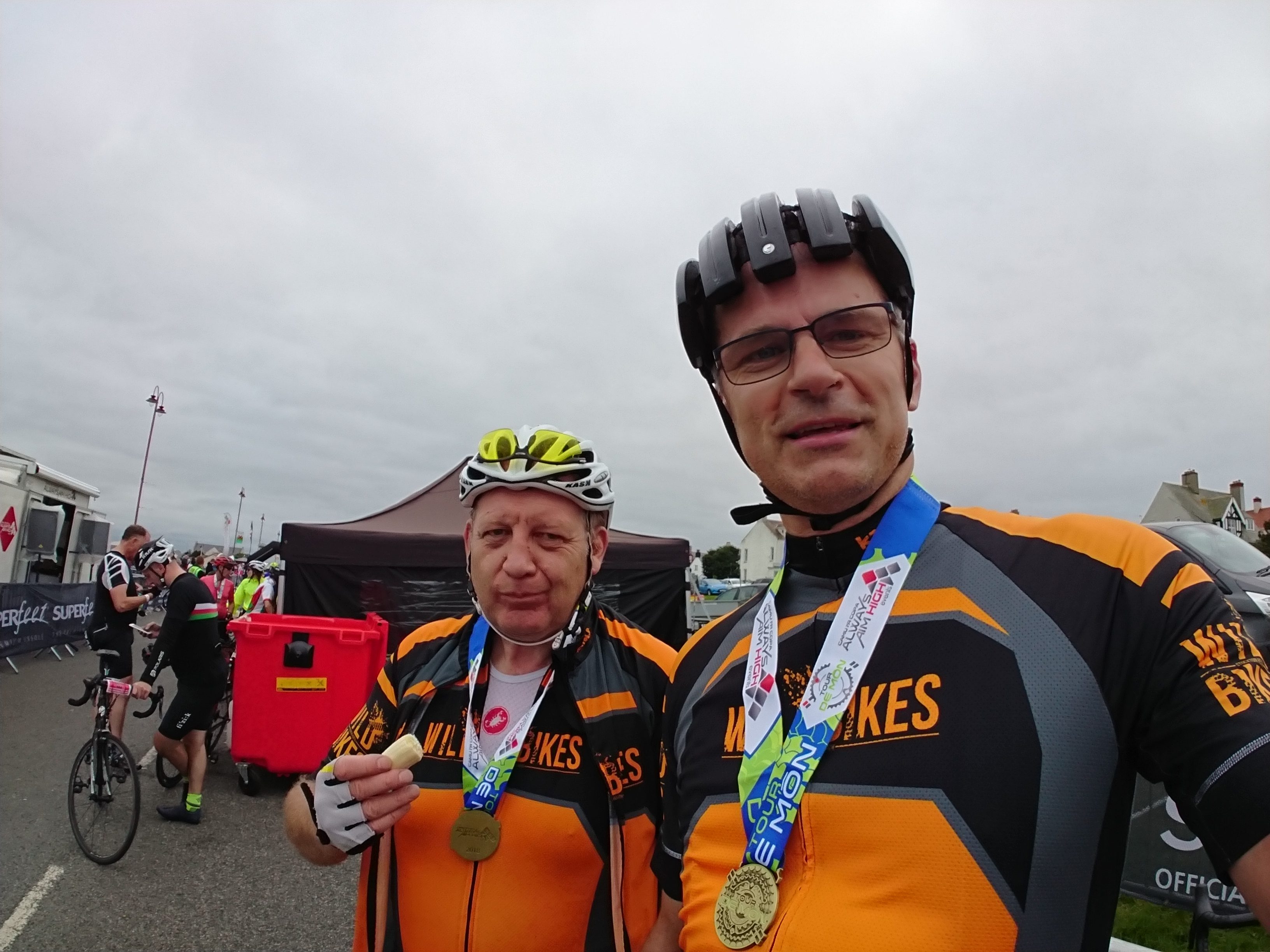 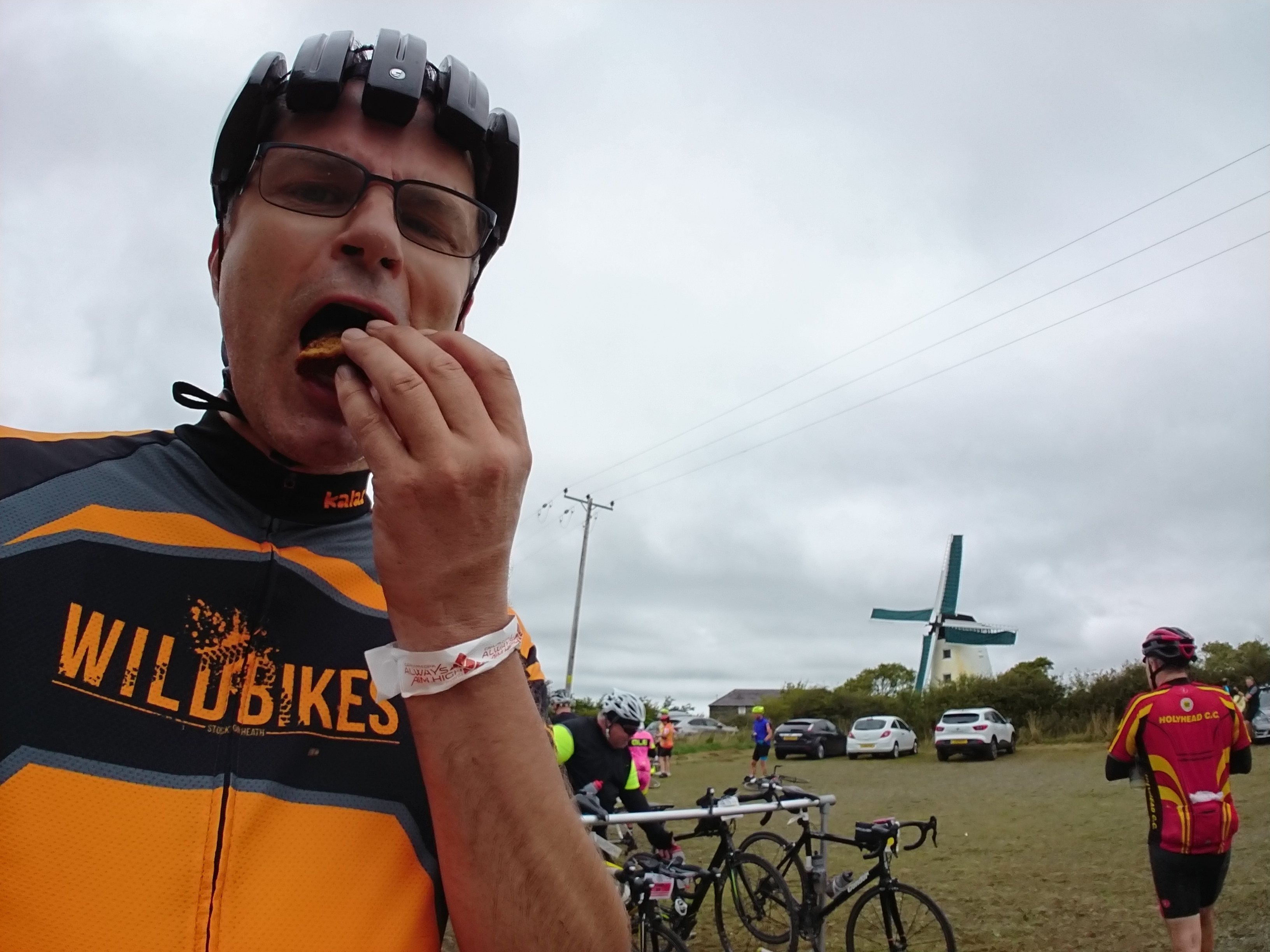 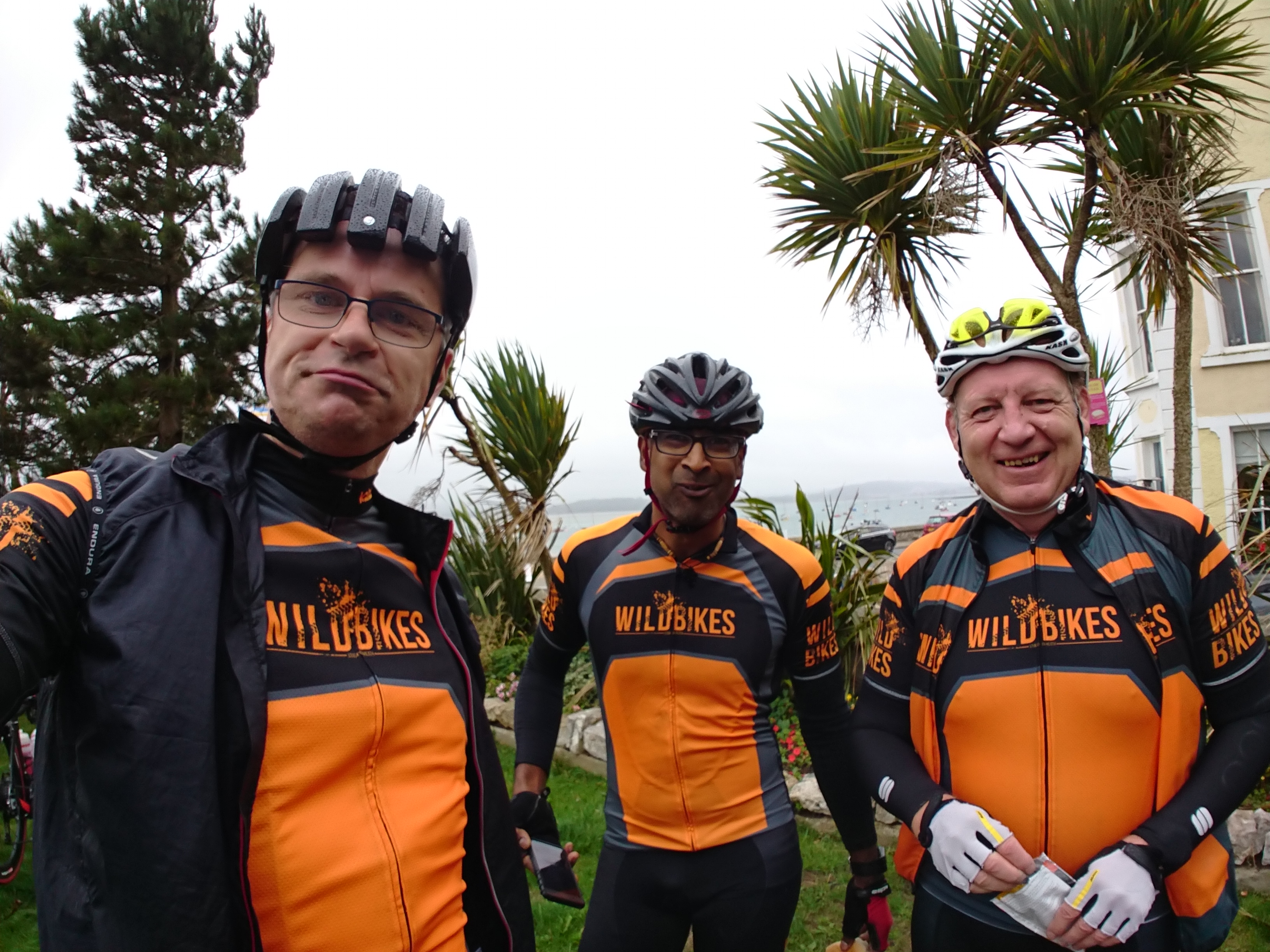 Before we knew it, we were at the final feed stop and heading back to Holyhead. The final sting in the tail is the coast road from Trearrdur to Holyhead; another R18 rated piece of rolling road especially on tired legs.

In a gentle breeze and weak sunshine, we crossed the line 8hrs19mins08secs after leaving it. Commemorative medals donned, we celebrated with a Bacon & Egg barm!

This was my third Tour de Mon; it’s a great ride, well organised and in a beautiful part of the world.